Ever wanted a game that involves a little strategy, the outdoors, throwing blocks of wood that make that satisfying CLUNK, and has apparent historic links to the vikings? Well, have I got a game for you!

Kubb, (Pronounced Koob) is a garden game that some people say originated from the Vikings. They tended to play the game after a raid, and often using the femurs and skulls of their enemies. Don't worry, that's not how you play now.... unless you have enough enemies, I guess.

Fast forward to now, and Kubb is played with wooden blocks, throwing pins and a beautiful king piece. 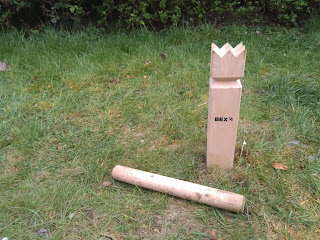 My first experience with the game was at the Outdoor and Woodland Learning summer networking event. We were camping at the Pillars of Hercules and played this well into the night. I wasn't sure about it, until I played it. Everyone there had played before and LOVED it, and it wasn't long into the first game I saw it's appeal. so when I got home I bought a set of my own, and am slowly getting my friends hooked too!
Kubb is so great it even has championships, not just in the UK, but in Europe as well. (I am hoping to go to both one year, but I need a good team first. I may be trying to persuade my friends to be in my team!)
Another great aspect of Kubb, is you can make a Kubb set fairly easy, with some logs, a saw and some sandpaper.
(in a similar way to my Number Kubb set was made, in this picture!) 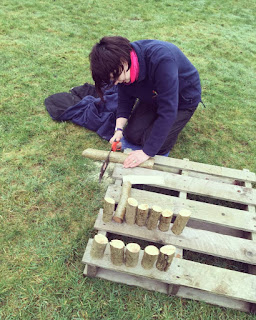 A pitch of about 6 x 5 meters is set up, and 5 Kubbs stand up on either side of the pitch.

In your teams the aim is to knock out all of the Kubbs on the opponents side.

The first team to do this, and then knock down the king, wins! 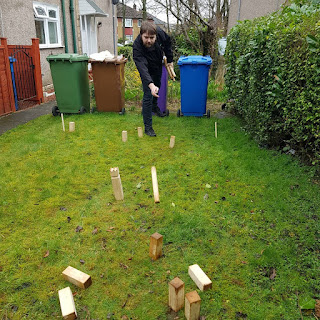 There's more rules to it, however I won't make my explanation too tricky, and if you want to find out more go to YouTube and have a look for some videos, or click here for the official rules.

I promise this game has hours of fun, and is good for the garden or even to take to the beach or to camping, and all ages can join in. Even little toddles can get involved even if they're just throwing the pin at any block. 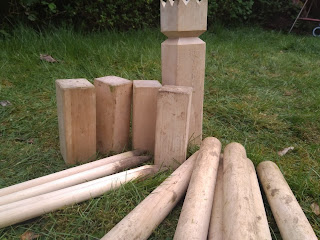