Into the Dark: Caving. 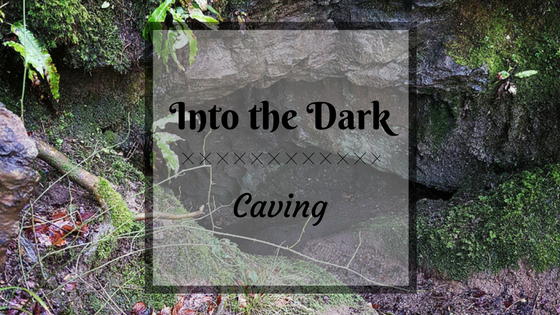 A couple months back, I was volunteering with an activity centre, hoping to get in some canoeing sessions, however the weather wasn't right for that so I got to help out where needed. "Have you ever been caving before?" I was asked.
"Nope"
"Well then today's the day!" I hadn't been caving before, and was always a little intimidated by the idea. I never liked the idea of feeling the dark behind me, and in front of me. Not to mention the bugs/ bats. However, I will give anything a go once! 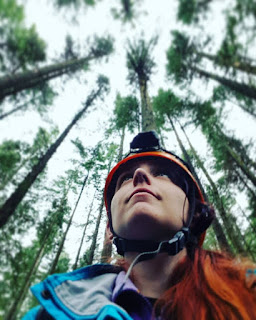 
I was expecting to go to a standard sea side cave, or something similar. But what I ended up seeing was an inland cave, created when a glacier pulled the rock apart, creating a tiny crevice to explore in the middle. Before arriving I was told that the only tricky part was the hole that you enter the cave from. When I saw it, I knew exactly why it was "tricky." It looked TINY. Luckily it only looked small, and was actually big enough to comfortably slide (feet first)  into.
The cave was incredible, it started with a 10ft abseil and placed us right in the split in the rock. You could actually see where the rock would have fit together. It was amazing to witness the power glaciers have. And as for the dark, it didn't end up feeling as scary as I had expected. We all had head-torches on, and when there are a good few people all with head torches on, the place really brightens up. 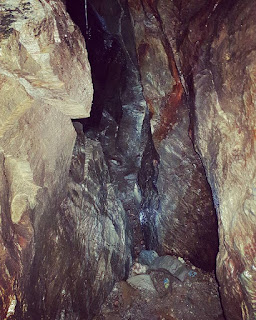 So we trundled through this cave, finding it cold, and wet, but just a surreal experience. I wanted more instantly. I could have easily spent a whole day in there.
When i had a chance, I decided to research the paper caves. The Campbell clan had made it known they supported the rebellion of James VII, and as a result of this the king at the time ordered their properties to be destroyed. However the Campbell's where smart, and hid the deeds to their land so that legally their land's where not allowed to be taken by the king. The paper caves are where their deeds had been hidden. Which is why they are given the name "The Paper Caves"


When I got home, while I was still on a high from having experienced my first cave, I decided to look up caving groups and found the Grampian Speleological Society and got in contact with them, who put me in contact with a woman who does caving who is local to me. It didn't take us long before we had a trip to Cleeves Cove Planned out. 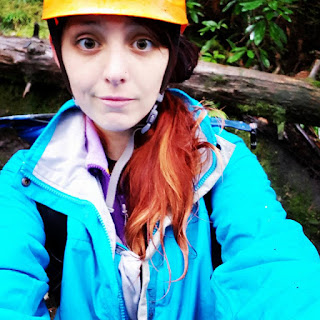 Cleeves Cove
This was the perfect cave to start out with, as a hobby. It was close enough that I could drive there, and there is no need for technical equipment (other than a torch) and has tight enough spaces that I could experience having to shimmy through some holes.
Going through the Forrest to get there, I noticed a sign that said "beware of the snakes" ... I kept that to the back of my mind, bearing in mind that it is winter and snakes don't like winter! 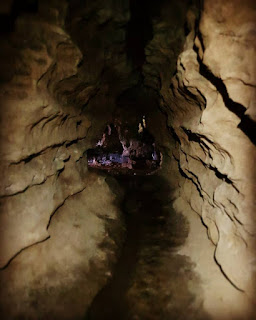 The cave was amazing, I was taken aback by the texture of the rock. It almost looked bubbly. You could see where stalactites had formed, but unfortunately there aren't many left as tourists tend to take them home. As I entered this cave, it was far different to the paper caves. It had many different big chambers, big enough for standing up on, with small crawl holes attaching to each. There where a few holes big enough to go through but you had to push with your toes and lie sideways.
Going through some of the tunnels, there where clusters of orange moths on the walls. I'm not a fan of moths, but they were pretty dormant.  At the end of the cave there is a huge pillar, which is just jaw dropping. The path leads all the way around it. (This is also where there was a geocache) 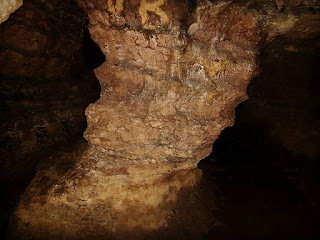 Once we had been around once, which didn't take long. We went round again. This time when we approached the pillar, we heard squeaking. The high pitch squeaking of bats. I can cope with spiders, I can cope with moths, but the idea of being in a cave, with bats flying around me was enough to freak me out a little. We went back to the entrance and realised that we hadn't got the geocache so went back in to get it. 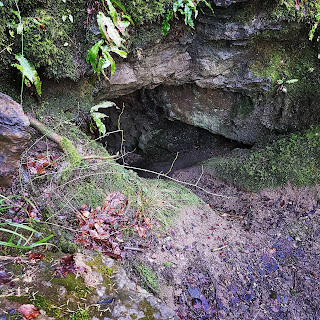 Cleeves cove  is also known as "Elfhame" due to the recordings of Robin Cummelle who said:


"that at Halloween they would come riding out of the caves on horses that were the size of mice, their long yellow hair straming or tied in knots with crimps of gold. Their quaichs were acorn cups and they drank wine beneath the toadstools. Their cloths were green velvet and their arrows were made of moss-reed tipped with flint arrow heads that were dipped in hemlock poison. The bows were made from the rib bones of unbaptised babies who had been secretly buried in the shaws and glens."  (Wikipedia)

The cove was also used by Covenanters in a time where they being persecuted by the government of Charles II, and this cove was a place of refuge and the glen was known to hold conventicles.

Caving is fantastic, and really does take my breath away each time. I can't wait to see what other cave's I can explore soon.
Until next time
Jade- Your introvert Adventurer 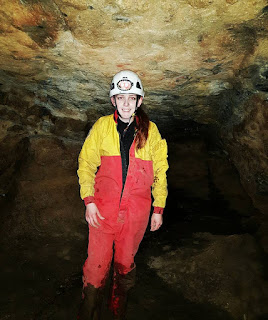