I've signed up for the kilt walk. A full 26 miles at once for charity. (see more about it here) And because I had sprained my ankle, I have been a bit out of practice when it comes to walking.
So the first Saturday I had to myself, I planned a wee walk. Nothing to strenuous, nothing too long. I decided to go check out Bracklinn Falls.
Walkhighlands have listed the walk, and I done my fair share of research. I love a good waterfall.
So off I went to drive to Callander.

It's been a while since my last proper walk, other than the Bothy trip, it was probably late last year, but even just walking less than a mile from the car I already felt this weight lift off my shoulders and could feel myself becoming more myself in an instant. The views on the walk to the falls are beautiful and stretch for miles. You can see a river meandering into the hills. I stood watching the view for a little while. 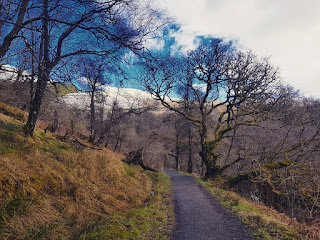 A little further down the path and I started to hear the rumble of a waterfall, and as it starts to appear you can start to feel the presence of the water crashing against the rocks. I decided to scramble a little bit closer to the actual falls, there was a path engraved into the grass leading to the rocks. I twisted my ankle a little there, (which is a great thing to do when you're recovering from a sprained ankle) but luckily it didn't affect it all. A few people where walking on the path looking at me, as if to say, "what the hell is she doing that close to the water?!" (I wasn't putting myself anywhere near the slipping down the waterfall zone, I made sure I was always in a position that no matter which way I could slip, I would land on rock!) 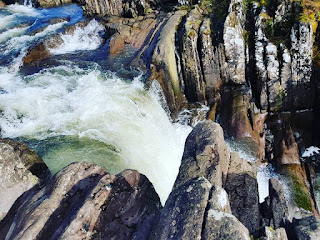 After my wee scramble, I got myself back onto the path, and carried my walk. The path led across the bridge and along the river, eventually taking you up a hill away from the river and towards a dense Spruce woodland.

I don't know about you, but Spruce Forests are my favourite. They always have a dark but enchanting feel to them, as if some magical creature is going to pop out of the darkness and take you on a whimsical journey at a moments notice, this of course didn't happen. However, there was a murder to be solved. 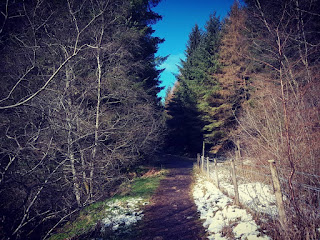 As I was walking on the snow covered path, there was what looked like a decapitated head on the path, the closer I walked, the more I realised that my eyes where not deceiving me, there had, in fact, been a horrifying decapitation. The head lying inches from it's body, still smiling, despite it's body melting away in the sun. (Yes, I am of course talking about a snowman!) I have to admit, the smile creeped me out a little bit!

I started to see the end of the tree's, and the landscape was opening up. Then the mountains started to appear. The sun was shining, the snow fresh and the air crisp but blossoming into a springtime feeling. The landscape was absolutely stunning! It took my breath away a little bit. This was the first time this year I had been blown away by a landscape. 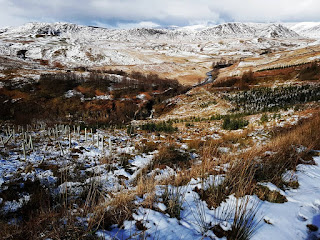 I continued my walk, which took me downhill. I could see a couple of people walking that started at the same time as me, (but opted to not mess around on the rocks near a waterfall!) They where at the bridge I was approaching, that stood over some more waterfalls! I stopped there for five minutes, taking in the beauty and power of the falls. The woman came up to me and asked if I wanted my picture taken, (she took a good one at that!) 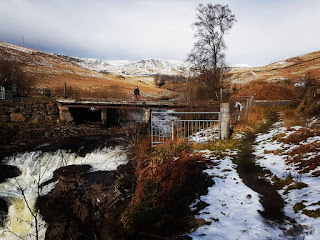 The rest of the walk wasn't quite as interesting as the first half, apart from being able to see exactly where I had just walked from, being able to see the distance that I had covered. At this point my ankle had started to feel a bit sore and I was starting to really crave something tasty for my dinner. There where a family a few meters behind me, talking about lasagne and burgers and I swear I could taste the food just thinking about them!

All in all, this walk brung me back to myself. It grounded me. Any stress I was feeling suddenly fled, and my mind was all of a sudden clear again. On top of everything, it was my first day of training for my 26 miles of madness! 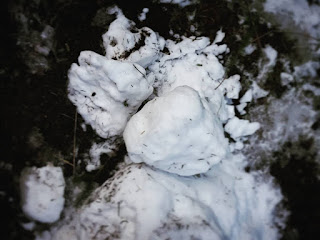 Until next time,
Jade - Your Introverted Adventurer. 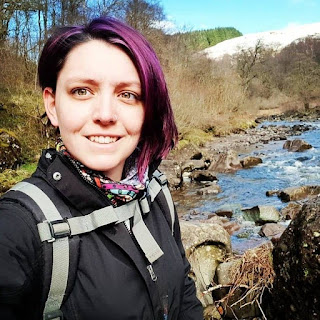