As you guys know, i'm an active outdoorsie person, I take great pleasure in just being outdoors, even if it's just sitting on the grass and reading a book.
Some of you may also know, that I am getting married in July. (Not long to go.) One of the traditions for every marriage, is the hen and stag parties. I left my closest friends to decide the fate of mines, and I can say with confidence, that they all know me SO well.


I wasn't allowed to know anything about my hen do. Literally nothing. I was only allowed to know the location so I could get there and other than that I was kept in the dark. 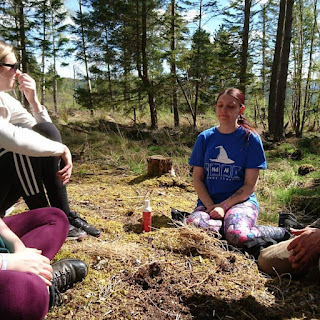 The party started on the Friday, and all of us sat and watched Burlesque (GREAT FILM) and had a few glasses of fizz, it was bliss. The following day, we had to get up early because we had to be at "The Place" for 11ish. I had a sneaking suspicion as to where we were going, as someone had said in the car "it's 12 miles down the main road," (or something similar.)


A few minutes later we pulled in to Craggan Outdoors. I could see other hen/stag parties, all a bit more traditional looking than us with sashes and all sorts. Some where doing foot- golf, some where doing clay pigeon shooting. I knew I was either going to love or hate what was planned for me, but I had faith in my girls that they had planned something amazing.
We walked into the cabin, and had to sign some release forms with all the rules and risks of the activities we could be participating in, and then the guy said "Are you girls ready for some archery?!" 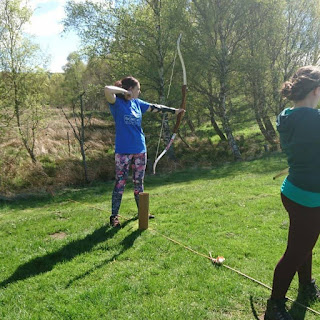 A little history lesson. When I was 12, I did a beginners course in archery, from there I got my own bow, and was on and off with archery until I was about 21 or 22. I've competed several time's.I once shot on the same target as archers that have competed in the Olympics. (Not that I was any good, in fact, I missed most of my shots that day because of the pressure.) Lately I've even been toying with the idea of doing my archery NGB's. So the idea of doing archery brought a smile to my face.

I wished I had brought my own bow, however it was oddly refreshing having a bow handed to me, already strung. It was also amazing to go back to basics, to take away all the equipment, and just have a bow and an arrow rest. None of the fancy sights, stabilisers or anything else. Just the bow, the arrow and me.  The activity leader talked us through all the safety stuff, and how to shoot. This was also interesting as someone who has been taught by other people, to see the difference in style.
We played a few games, which helped with aiming and figuring out where your arrows are going compared to your aim, and we did some archery tennis, (whoever gets the higher point wins the round) where it got competitive! All in all the archery was great, and as soon as I have some free time I'm going to try and find a way to get back into shooting with a club!

For lunch we were provided with burgers, soup and salad. A very filling and tasty meal. None of us could quite finish it. I was dying to know what the second activity was, but no one would tell me. The only thing I had to go on was that my friend who is eight months pregnant could participate, so it couldn't be kayaking, or climbing. After we had all finished, the same guy as earlier came over and said, "Are you all ready for some bushcraft?!" My only thought was YUSSSSSSS, BUSHCRAFT! 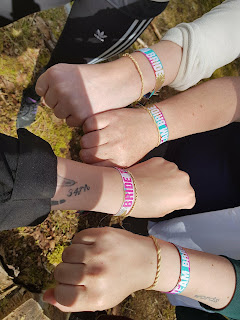 I love bushcraft, the idea of being able to live off the land in an environmentally friendly way is just right up my street. Finding new plants to ID, and to find out what they are used for is something I am really passionate about. There is also something so satisfying about lighting a fire. Most of us who where there are passionate about the outdoors and bushcraft, but my sister-in-law is new to it all, and very much out of her comfort zone.
We met with a guy called Dan, (Dan the Man) who took us up to a wooded area, stopping us along the way. I think when he first met us, he was expecting a standard hen party who doesn't really have that appreciation and knowledge of the outdoors, but when we revealed our relevant qualifications and interests we got to some very interesting conversations. 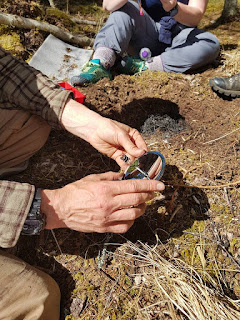 We started by foraging for some plants to put in a tea. I love this doing this. We collected some silver birch leaves, some gorse flowers and some Norway spruce pines, and shoved them all in a flask of boiling water. While that brewed we talked about making a fire, and how to do this with leave no trace. We also where able to try different ways of lighting a fire. Including using a parabolic fire starter. (Using a curved reflective device to focus ray's of sunlight on a flammable material.)
We all got a chance to start at least one fire. I LOVED lighting a fire with the parabolic fire starter, it was the highlight of the bushcraft. After igniting a wee bit of charcoaled cloth, I put it inside some dried grass, and gently blew on it until it ignited. I was pretty chuffed with myself.
Once the fires where out and covered up, we got to drinking out tea. It had the most fragrant taste, the spruce was the first thing we could taste but then it had a refreshing taste of gorse quickly following it. I would happily drink that again and again. We had a little bit of time to kill after everything so we where shown how to make rope with lime bark. It was fascinating. I haven't forgotten and was even doing it today in work, and yet to try and make rope of out nettles.
Dan was very informative, and also gave me some info on where to find training and other such things for the job I do, (I'm an outdoor education practitioner.) So, Thanks Dan! :)

After a full day in the hottest day of the year (so far) I ended up with heat- stroke, and while some may think the night that followed was boring, I really enjoyed myself. Unable to drink alcohol, and unable to stand without being dizzy, we curled up in our PJ's and watched the Eurovision, eating crisps and other junk food. We also had a few nerdy games provided by one of my friends, she made them all herself and took so much time on them!

Before I go, I just want to say a MASSIVE thank you to my maid of honour, Hannah, for planning all of this, and including everyone. You've been amazing and I don't think I could have done it better.
And also, a massive thank you to you guys that came and made it the weekend it was: Hannah, Fiona, Rebecca and Ashleigh, you guys where all the ace. (I have the best friends!!!)
And last but not least, a thanks to Craggan Outdoors, for providing such a wonderful experience. 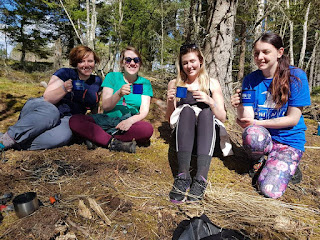