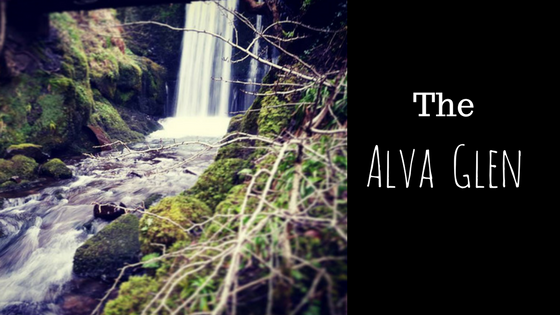 Alva Glen has been on my list since of places to walk since I first heard about it, about a year ago, and I finally managed to get round to it. I needed an excuse to get out anywhere. The Christmas period had seriously lacked adventure, and I was starting to feel that itch for the outdoors, and no, the itch was not midges. I spent a while looking up where to go, but no where felt as exciting as the Alva Glen.
Gorge's and Glen's have always felt magical to me, seeing the water rush down past rocks, and the deep greens growing everywhere. It always reminded of fairies and elves, because this was certainly the place that they'd live.
I had done some research on the Glen, it looked stunning, and there were some geocaches to help me find my way. I also needed an excuse to test out my new action camera, and I felt like water was probably the best idea. I had to make sure it was waterproof! 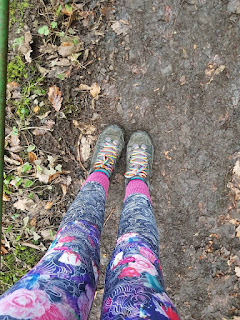 Anyway, I got out the car and within ten minutes I had been wowed by the first waterfall, I also must of looked a right fool switching selfie's between my phone and my action camera. (In proper millennial style)
I carried on up the path, which followed the glen closely. The narrow gorge went rather far down to start with but then the path and the burn met each other gradually. After going up a bit of a hill, I felt a bit out of breath and realised I had left my inhaler in the car. I decided to pace myself, instead of just going back.
I ended up passing a few waterfalls, until I got to a gate that said "Keep Out" which I thought was the end of the walk. But as I turned around there was a path leading up a hill, (away from the keep out sign.) I decided to follow it. 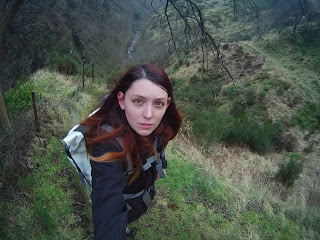 The path zig zagged up the hill, quite steep, I had to stop every time I saw a bench just to catch my breath, especially as the wind had picked up. The views where beautiful, and I spent a fair bit of time trying to take photo's of it. There where a couple very very slippy bits of ice, which I nearly went flying on. I got to what looked like the top of this hill, and thought "that's it, I'll go back, and get the geocaches on the way back." and opened my app, realising that the geocaches that I wanted to get where further on. and the word "cove" was in the name. I couldn't give up on a cove. That just sounded like too much fun to pass up.
I carried on along a path, when I came to the end of a path on a cliff, I noticed what I assumed to be the cove below, my breath was taken away- and not just with the asthma! I had to go down there. I had a wee scan around and noticed a stile going over a fence, and that the path led down through a sheep field. These sheep all had huge horns too. I'm not the biggest fan of walking through animals' fields, especially on my own, but i wasn't about to give up because of some sheep! 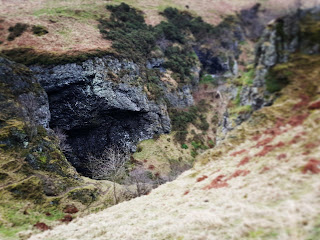 So down I went, into the deep dark cove. I had to bum shuffle a little bit because of how slidy it was, and the worst part was that I put my hand in sheep poo....
Anyway, when I got to the cove I was amazed. It was two beautiful overhanging cliffs that closed at the top, the roof being incredibly high. There was a waterfall flowing through a gap in the rocks at the top end. The rocks all around me where dripping, and if not dripping they were ice stalactites, the kind that if they fell when they where right over me, I probably wouldn't live for long. 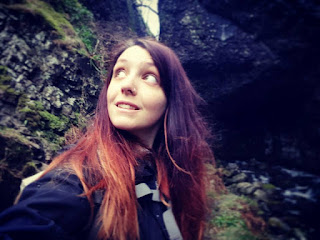 I took a few pictures, and one Snapchat video, and decided to put my phone away and enjoy the feeling of this cave for a little while. That didn't last long as about 2 seconds after putting my phone away, a rock fell from the roof of the cove and landed about 2 inches away from me. (Note to self, buy a helmet) So I went to admire the cove, from just outside of the cove. Where there was a lot less chance of being hurt by falling rocks.
When my fingers where feeling a little numb I decided to head back. The winds where picking up on top of the hill. On the way back I felt very relaxed and enjoyed learning how to take long exposure photo's on my phone! The only thing is, I forgot about the geocaches! 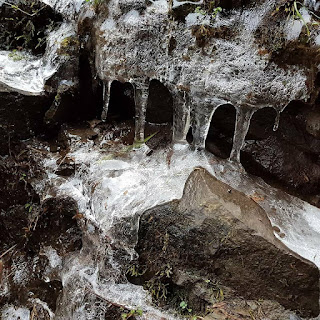 All in all, the Alva Glen more than exceeded any expectations I had. It literally took my breath away! It was a fantastic way to start my year, and I can't wait to finding more places in the coming year. 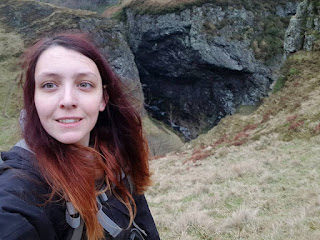