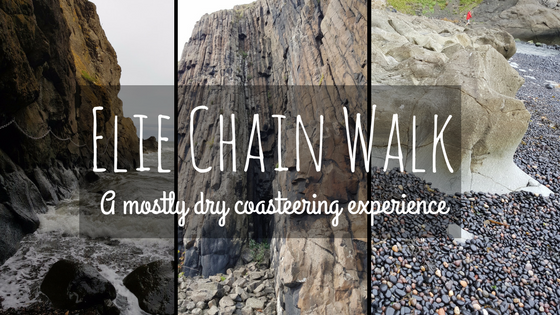 My last post was all about the differences between Canyoning and Coasteering, but even when doing the particular activities the experience can differ hugely on the activity. For instance, last week I done the coasteering at Easdale, where we swam, jumped, and climbed. This week we headed to the Elie Chain walk, for a completely different (and mostly dry) experience. 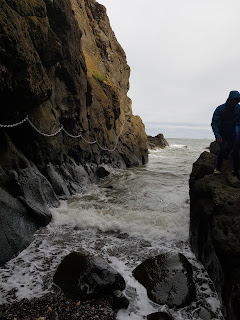 About the Chain Walk
The chain walk is located about 1km away from Earlsferry on the east coast of Scotland, and goes directly underneath the fife coastal path. It is a series of chains that helps  you scramble along rough coastline for about 0.5km. The chains are sturdy and are tested by a group of engineers every year. The chains are attached to anchors which are buried 2 feet deep into the rock, these where first put in back in 1920, and have since been replaced in 2000, and most of the chains have been replaced in 2010. Running under the chains are series of footholds, to make the experience easier for everyone. 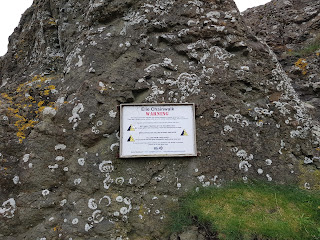 Things to remember
The chain walk runs along a very dangerous coastline, so if you are thinking of doing it, check tide's, swells, wind, and weather. Make sure you are going when the tide is going OUT to allow plenty of time to do the walk, it can take anywhere between an hour to three hours, depending on your capabilities. The last thing you want is to get trapped inside any of the caves. This walk can be fatal if the tides or weather isn't right.  To find out this info, tides click HERE, to find out info on the swell and the wing, click HERE and to find out weather click HERE.
Parking is available in the village, and at a caravan park (if you are doing it west to east) 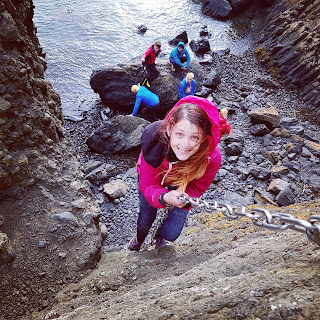 I have been itching to do this walk for ages, but since starting my degree, I've picked up the knowledge that really allowed me to feel confident going, (like the tide times) So when my class got the choice to go home early we decided to all drive down to Elie instead.


We got there just as high tide was rolling out and waited until the water level was JUST below the first set of footholds to begin. 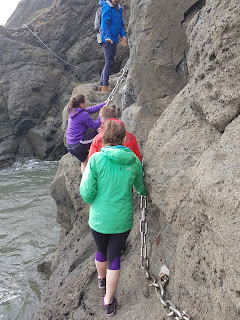 The first chain runs horizontally along a cliff, and in my opinion was the hardest of the lot. The water was splashing up a little bit as I was walking along this part, not to mention the heavy use of my non existent upper body strength, I could feel gravity trying to bring me down in a very clumsy fashion, however I won, and managed to stay upright.
You then end up on a very little bit of shore, full of rocks, to carry on up a wee rock, then across a wee jump (or rather, long step) and cling on to the vertical chain while climbing higher. I have to admit, that with the waves coming in between the rock and the cliff, I felt like I was jumping from a rooftop in a very action film manner. 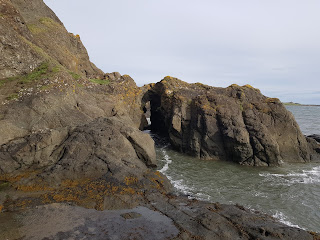 Once we got to the top of the hill a bay revealed itself, it had a lovely cave/tunnel, which, that at this point was still full of water. I was itching to go in. We followed the bay around, clambering on the rocks, the rocks here where amazing. Half of the beach was pure black and perfectly round pebbles, and the other half was grey, smooth, rocks, that look like they had been carved by volcanoes. There where pillars of rock looming over us. The stone structure resembled the giants causeway. 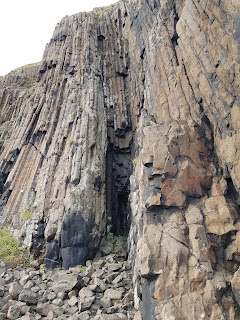 This led us to a vertical climb, following another chain, and then a vertical descent, blindly feeling for the foot holes, and clinging onto the chain like my life depended on it!
We followed another chain round another bay, which revealed a huge cave. that I ran straight for, exploring caves is amazing, no matter how big or small! 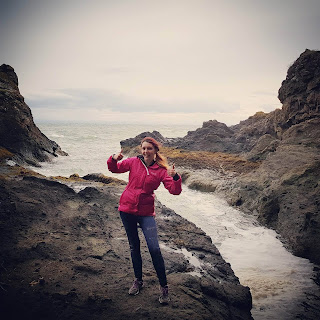 On the other side of the bay was another chain, that took us to our finishing point. The look of the coast changed suddenly here, and went from being sharp, grey rock, to flourishing green grass, with rocky summits. This is the area where we decided to chill out for a little while: by chill out, some of us where running up and down the rocks, some of us went to explore and look inside another little cave, and I was acting photographer. (I decided to take the risk of taking my phone with me, luckily I didn't need to swim!)
To get back we decided to go the way we came- rather than go up to the coastal path- which meant by the time we got back to where the wee cave/tunnel/thing was, I was able to go through it! 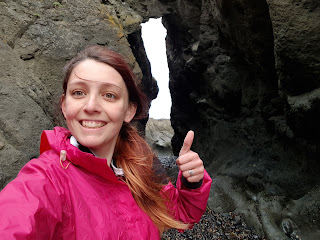 I'm so glad I finally got the chance to do it, and i'm sure pretty much everyone that came with me agrees! Pretty sure i'll be again, in the near future, and showing off one of Scotland's most unique walks. 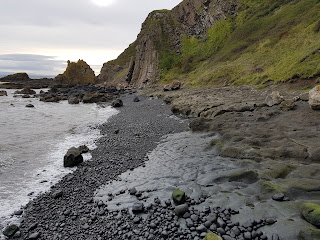 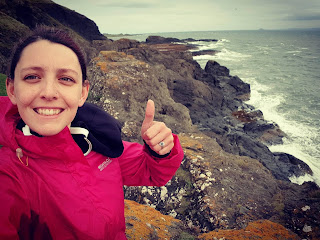 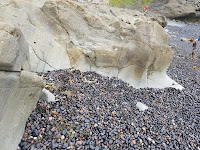 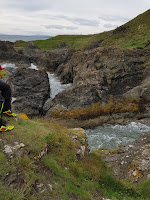 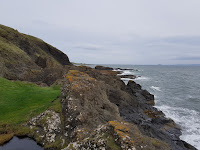 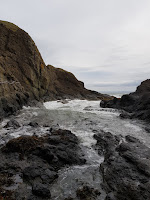 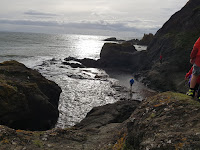 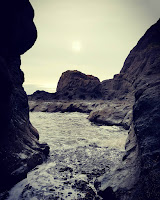 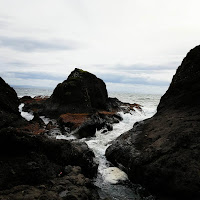