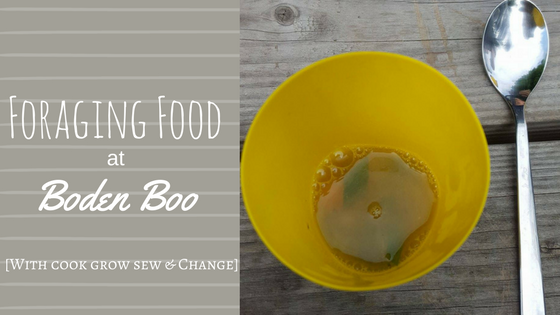 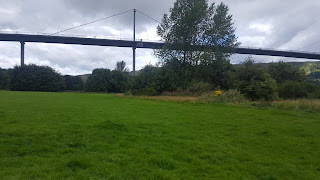 Foraging is a fantastic activity to do, if you know what you are doing. It is the most Eco friendly way to eat, considering your carbon footstep is non existent when doing it. You can do it for free, and mostly anywhere with public access. (as long as your not selling anything you collect)
I already have a little knowledge about edible plants, and their uses, but not nearly as much as I'd like. So when I saw an event on Facebook to do some Foraging with Cook Grow Sow & Change, I jumped at the opportunity.

A little background: Cook Grow Sow & Change is a fantastic community project which aims to reduce the carbon footprint of the community, and raise awareness of climate change within all ethnic minorities in Glasgow. They have a beautiful garden, where they grow all sorts of plants at Napiershall Street. Have a look at their Facebook page and keep up to date with all their events! 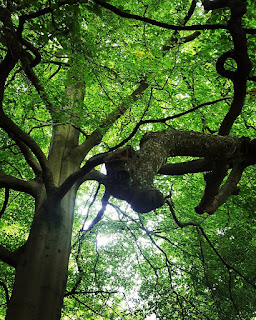 I arrived at their fantastic garden to be greeted by Bo, the leader of the workshop, and handed a pair of gloves for when we started the foraging. We got told that we'd be going on the bus to Boden Boo, a little woodland area just under the Erskine Bridge. We set off at 10.15.

When we arrived, Bo passed out a few reference books, so we could research plants on the way round, and a clear bag for putting our foraged foods into. Then we headed straight into the woodland, following easy paths all around. As we walked around we were getting shown a lot of common plants that you wouldn't normally think of as being edible.
I found myself being reminded of some of the wild food's I already knew a little about from my Woodland Activity Leader Training, such as nettle's, plantain, sticky willy and more. (Although if I hadn't done my WALT course, I'd not have known any of it!)
However I also found myself learning a lot more about plants that I didn't know. Such as getting a very quick demonstration on how nettle could be made into thread, and finding out that Rowan berries are fine to eat when cooked! I also got to add a few more plants to my knowledge. 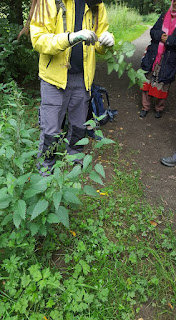 We then got taken onto the shore to learn about some of the plants there, such as gut weed, (which is apparently meant to taste amazing dried, and fried with a little salt) and seaweed. (Did you know, that there is only one poisonous kind of seaweed in the UK, which is mostly found underwater, and the rest are a great source of protein, so if your ever stuck on desert island, get yourself some seaweed) We unfortunately weren't able to forage anything from the shores as the pollution was beyond belief. The sand was a shiny purple from oil, not to mention the amount dogs walking by.

Once we had finished identifying plants,we found a lovely bench and started to make some soup. Bo had taken some purple carrots from the garden, and had some sweet potatoes and onions with her. Everyone had a  job to do, we were all hands on deck. Some people were cutting up vegetables and the rest were washing the foraged foods, and we put it all on the boil. Within 15 minutes, the soup was ready! Normally I hate the idea of eating soup that hasn't been blended for smoothness, but I was SO excited to taste this fantastic soup! We all got a little yellow cup, and a spoon/fork, and dug in. I have to say the soup tasted amazing. I think it had that extra added taste of "I helped make it." 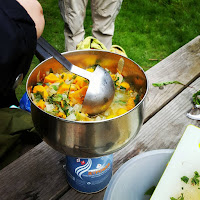 All in all, foraging with Cook Grow Sow and Change was a fantastic workshop that refreshed and added to my knowledge of plants. Bo was a fantastic leader for this workshop, she added so much personality to the workshop and was well informed on what she was teaching.  It is also great to see such great people working for an amazing cause. If you are interested, give them a visit and see what they are up to. I know I will be!

Before I go guys, I want to let you in on some exciting information. I'm up for an award! It would mean a lot if you could give my page a vote. click here to vote. (It will literally take two seconds)
Thanks a million guys

Remember: Do NOT eat any plant you do not know is 100% safe, do your research before eating any plant you find in the wild. There are so many look alike's around. 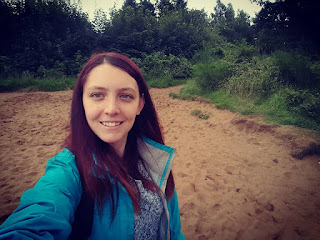 Until next time.
Jade- Your Introvert Adventurer.