The Three Lochs Way: An Introduction to Long Distance Walking 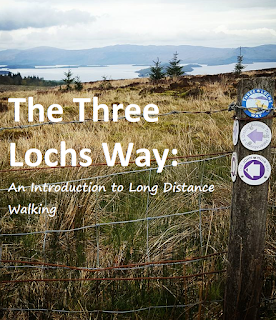 It has been a while since I have last posted, and this is down to having pretty much no free time!


I have also achieved one of my goals towards Lands End to John O Groats!


I have completed my first Long Distance walk. Officially 34 miles long, (we walked 39 somehow) the Three Lochs Way took us up above Loch Lomond, Gare Loch and Loch Long, and gave us stunning views of mountains all around. The area is flourishing with wildlife, and is just breathtaking in every way possible. The recommended time to take on this walk is 3-4 days. (walkhighlands suggests that you take 4) We done this in two, and although we managed in two days, taking three would have made the last section a lot more enjoyable.


Day One- Balloch to Garelochhead 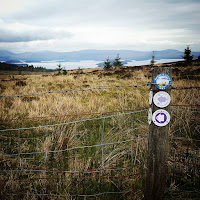 I met the girls from the Rambling Roses at 8am in Balloch. We were all feeling equally energetic, and up for the challenge, and still very optimistic that two days will be a walk in the park. We set off promptly. The first stretch between Balloch and Helensburgh was lovely. The terrain was varied, the section was relatively short, and not too many steep hills. There was a really steep hill to start the walk off, but once we made it to the top the views where beautiful.


We walked through quiet woodland, covered with moss, pine tree plantations and even a wee farmyard. The first stretch was easy, and led us to believe the rest would be as easy going.


The walk through Helensburgh felt long, we didn't expect it to be as big as it was. We stopped for lunch where we could see Greenock across the water, and where seagulls where looking at us, hungrily. We then went in search of toilets, and ended up going to a pub across from the train station, where men where screaming at the TV because the the football was on. Coming out of Helensburgh we walked past some beautiful houses, or rather mansions. Dreaming of a life where we could afford such houses. Right at the end of Helensburgh we saw a beautiful Charles Rennie Mackintosh house. At this point, our hopes where still high that the rest of the walk was going to be as easy going as the first stage. We walked over a wee hill, in fields where cows had previously been. On the top I accidentally found a geocache. Just lying out in the open. This was a happy mistake. 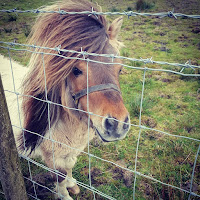 The bottom of this hill was where the hell began!


Any walker will know how bad tarmac is to walk on for prolonged periods of time, well any walker except from me (at the time.) Well, we hit tarmac, the rest of the days walk was on tarmac. Horrible. Hard. Sore. Tarmac. My feet started to blister about halfway, I thought it was a cramp at first. Then my knee started to cramp. My mind was taken off of this as we met a Shetland pony (that I named John Bon Pony, because of its 80's hair metal hair) and calves that where skipping around the fields. The rain started on our last few miles, at this point we were itching to get to the hotel. It felt like we had been walking forever. We were constantly stopping to let cars past. 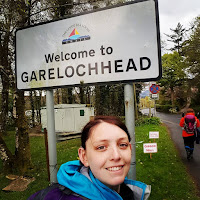 We decided to walk away from the Three Lochs Way official path to get to Garelochhead, we followed this road right down to Faslane, then walked 1 mile along the shore- most of which was fenced off due to the naval base. There where signposts every few meters explaining the prosecution if you where caught trying to enter, and signposts reminding us that there were guard dogs, not to mention the rolls and rolls of barbed wire stretched across the ground behind this huge fence. The last mile was hard. Mentally exhausting. We knew it was only 15-20mins, but our legs where giving up. I wanted to just fall down and stay there. I wanted to go home. Part of me wanted to give up! But I knew that wasn't an option. I came this far, I can't give up!


We made it to the Inn, by about 5pm. We got the keys and instantly took our boots off, lay down and let out a sigh of exhaustion and happiness. We then went down to the bar to get ourselves fed and watered. The food was amazing, and just what was needed. That night wasn't a late one. 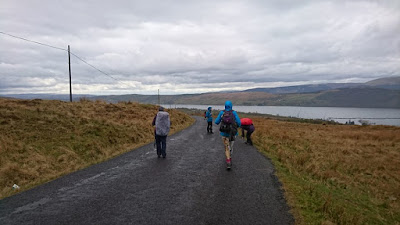 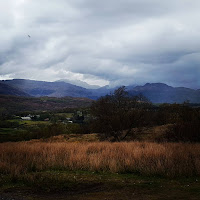 I woke up refreshed. My legs weren't sore any more, and I was ready to go. I went to the bar to get my breakfast and we set off. The first wee bit of this walk was all uphill, once we were at the top the wind nearly knocked us off our feet. We climbed onto the American Road, over a very dodgy stile. We were on tarmac again. My feet instantly felt it. The road dipped down out of the wind and I could hear again. We noticed that this was part of the "Danger Area" on the map. One of our team had phoned ahead to make sure there was no army training on at the time of our walk. Luckily there wasn't. The signs reminded us every few hundred meters that this area is used for training and when there are red flags around, to vacate the area. The tarmac didn't last long, we were on an old track before long. Stones under our feet felt a lot better. The sun started to break out and we started to be able to see Loch Long to our side, and continued on our side most of the journey. (I wonder why it was called Loch long?) 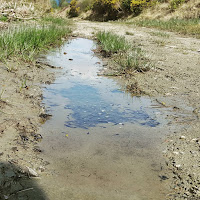 We came to a wee bridge that went over a little waterfall. We noticed that there were bullet shells lying everywhere here. This gave me a reminder that we were in an army training area. We kept walking along the path and met two army men going the other way. I immediately felt like we were going to get asked to leave the training area. We headed to the top of a steep ascent where we were met by the men going back. We stopped for lunch, overlooking some very picturesque mountains, the only downfall of our view is that most of the forest had been chopped down.


As we carried a long the path, we noticed a great amount of tadpoles in puddles along the side of the road. Frogs being my favorite animal, I probably missed a great deal of scenery because I was too busy staring into every puddle that went by.


We crossed a tarmac road and then headed onto a path going through some fields, with sheep in it. This is where we had a stand off with some a sheep. There were about 4 on the path, (including lambs) that kept running as we kept walking, then one with huge horns appeared above us on the cliff. It looked angry, like it was about to launch itself at us. We stood waiting for movement for about 10 minutes. (I could just imagine getting rammed by the sheep on my first long walk) Eventually it came down and moved to the other side of the path, watching us viciously as we walked past. 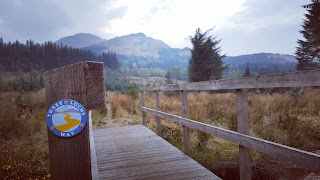 We could see Arrochar on the side of us, but we had to pass it to come all the way back to it through Tarbet. We couldn't work out why the route would take us so out of the way but we realized it was because of the views of  Loch Lomond on approach to Tarbet. 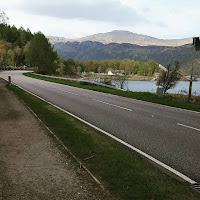 Once we hit Arrochar we knew that there was only 6 miles left. 6 miles is nothing, we were sure it would be the easiest bit. This was, in fact, the most challenging bit of them all. The sun had came out, and the heat was making us sweat. We were drinking more and more. I only had half a bottle of my juice left, and there were lots of small, steep, ascents. By about 3 miles I only had about two sips of my juice left. This is where I hit the wall. We had just walked through a kissing gate, and the thought of carrying on was torture. Three miles felt like an eternity. especially if the hills didn't stop. Three miles felt like forever. We checked the map, its slightly longer to get back to Arrochar, we had to continue. There was no other way. We stopped on a few of the hills, I pulled out my jelly tots, and my will power. My Jelly tots gave me a sugar rush, and made me forget about how much I wanted to down a bottle of water. My will power made me put one foot in front of the other for the rest of the walk. A phone call to my fiance made everything better, as he was there waiting for me. The last mile was on tarmac. The paving from hell. We were nearly there, we could see it. We could smell the finishing point. I phoned my other half when we were right across from the car park to tell him to come out the car and meet me, we had to get a picture taken, and I didn't want to walk to the car, and walk back to the picture point. I stopped, smiled, and got the picture. I nearly fainted. My sight went fuzzy and I felt myself swaying so I had to rush off to get a seat.
It didn't sink in that I had actually finished it and accomplished something til I was lying in the bath. It still feels crazy that we walked 39 miles in total.

But I've caught the bug and have started planning more long distance walks, in the lead up to Lands End to John O Groats. 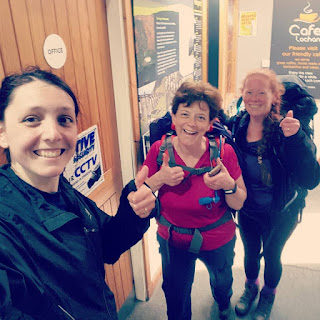 This walk has given me the real feel for long disntance walking, and has shown me that you need a lot of mental will power to continue. Its a good thing that I'm a determined soul, otherwise I wouldn't have made it past the first day.

Anyway,
Until next time
Jade - Your Introvert Adventurer.