My Second Ramble With the Roses. 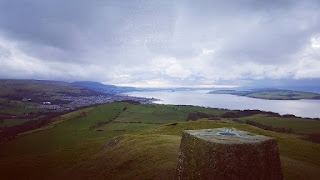 My first walk with the rambling roses didn't go as well as expected, as can be read in my blog post a few weeks ago. However I still felt very positive in the fact that I had managed to go out and meet new people! I had told my anxiety to shut up for just long enough to get out the door. It was a fantastic feeling.
So I done it again.

My usual Wednesday off came around and I wanted to do a lengthy walk, but nothing too hilly, so we agreed on doing the Knock Hill Circular- Largs. 8.25miles with an ascent of 268 meters.

I woke up on the Wednesday morning and immediately my brain was trying to give me any excuse not to go. Being tired was top of the list, however I pushed past the wall of excuses and made myself go. I am so glad I did! 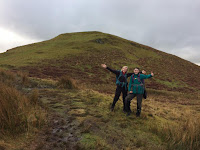 I met up with Heather (Creator of the Rambling Roses) and Julie (another member of the Roses) and we instantly all got on. The car journey (which my brain wasn't looking forward to) was great, and although I was dead quiet, I managed to talk a wee bit without having a bit of an internal panic about it. It was a breakthrough, it felt great being in a social situation and not feeling uncomfortable.

We arrived at the car park on the beach front of Largs and headed off. I have to admit I was ill prepared and didn't bring any maps or anything, I had studied the map online, and could tell roughly where I was going, and if all else failed I could bring out my phone GPS. 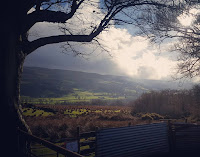 We set off, and within the first few minutes any nerves I may have had where gone. Heather and Julie made me feel right at ease, constantly reminding me that if they were going to fast, just to say. Thankfully for me, they didn't. (I'm pretty sure that if they where I would have just quickened my pace anyway.)


The route took us on a beautiful wee back road, down a track, and through a farm yard. This was when it started to get muddy. This walk is Bog Factor 4...One away from needing a snorkle!
"Its not that boggy." I decided to blurt out- thus making the rest of the path worse in the same way a cartoon
character saying "surely nothing else can go wrong" results in them getting struck by lightening.

As we kept going up this little track, the view was getting more and more magnicifant. It really did scream "brittish countryside." We kept paddling along the path and suddenly the peak of knock hill crept into view, we went straight for it. The views where breathtaking. We could see all the islands off the coast, and we could see for miles. A few photos later and we headed back down to find the path. . . "Lets go this way, it looks less muddy." Heather pointed straight down a field. It did look less muddy, but its another one of those situations where you say it and the rest of your journey chances accordingly, because this field was pretty darn muddy! Not only was it muddy, but it was downhill, and a few times I nearly landed on my ass, however my beautiful bum remained mud-less. (thank goodness) 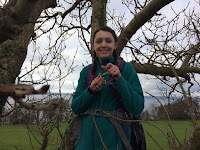 On the way down we got talking about geocaching. This is one of the subjects that if you get me talking about, I won't shut up. So I ended up taking Heather and Julie geocaching for the first time. Normally when I take a newbie, I can't find the geocache. But this time we were successful.


We got back to where we started, ate lunch and headed back. My legs feeling a bit stiff at this point, but what a fantastic day I had. It really goes to show you that even if you feel nervous and scared, if you take the leap it really can be for the best, this walk has given me the courage to keep going out with the Roses, and meet new people along the way, and a few weeks ago I'd have been scared stiff of going out and meeting new people.

So to anyone who has thought about going out with a group, but has never really had the courage to, just do it! You'll have a fantastic time and won't regret it.

Until next time,
Jade- Your Introvert Adventurer. x