As I scroll through Facebook this morning, I see everyone posting pictures of how great their 2016 was, so I thought to myself, instead of doing just a Facebook post, why don't I write about my top 5 adventures in 2016?! Its been a pretty good year,
So lets get started. 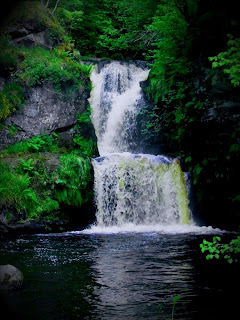 Linn Falls, or Linn of Ruthrie, is a lovely waterfall down a path beside the Aberlour Distillery. My other half showed it to me, a few years ago. The first time we went here I got soaked, as it had decided to rain, and I hadn't remembered my waterproofs. This particular time, in April 2016, I got soaked, by falling in....We were attempting to get a geocache which happened to be on the other side of the burn, (a wee river in Scots) so we searched for the easiest way across. I thought it'd be to stone hop near the falls. So I tried it. I got across easily, but getting back didn't go so well,I fell in. We had to cross the burn at a different point to get near the geocache, this time I stayed dry, and my other half fell in. And after all that, my phone died before we got a chance to find to geocache! 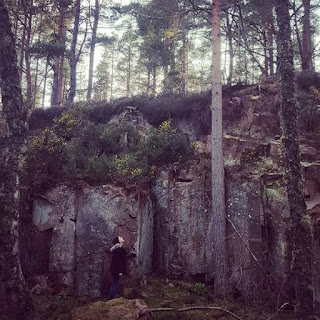 We stumbled onto Quarrel Woods because we were in search of more Geocaches, and i'm glad we did. Quarrel Wood is an old disused quarry, (hense the name) and if you search closely enough in the rocks, you might find some fossils of old fish and and reptiles. A fossils of the Elginia mirabilis was found here. We walked here on a Friday night, after a long week of work, on one of the most lovely days imaginable! We decided to spend out date night strolling in the woods. We were amazed by the rock faces of all different colours, and to make it even better, the colour of the setting sun was making everything come alive.
We also came across a tree, stood right up against a cliff, we named it Richard, its full name Cliff Richard! We didn't spend enough time here as the sun was setting fast, but given the opportunity I would definitely explore here more. 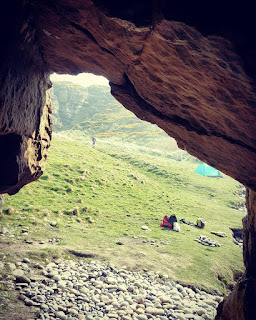 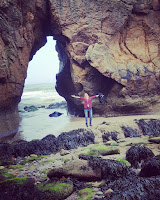 Cove bay was amazing. Thousands of years of sea and ice have molded this landscape until what it is today, and before the ice, this was a hot spot for reptile creatures, with fossils in the stone all over the coastal path. Back in that time, the land was barren and desert like, and much closer to the equator. Then the Ice Age hit, and it was thought that there was over 700m of ice, slowly sculpting the bay we know today as Cove bay.
This was another amazing day, the sun was out, and I was recovering from the sickness bug, and needed out the house. (Cabin fever style) We climbed down the steep path to the bay, and what a sight. There was a cave that went to the sea, another that went into the cliffs, and what looks to be the remains of cave on the left side. The pebbles here were all different colours, and it just felt like I was in a different country. We stayed here for a few hours, and then went to climb up the way we had came down, only to see a sign that says that is the disused path. Oops, oh well, and up we went. 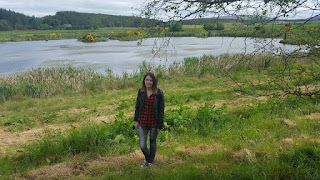 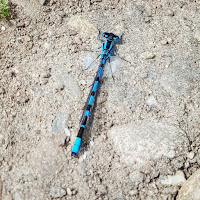 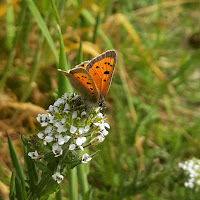 Now this walk, isn't marked as being a walk. The only reason we knew about it was because of the geocaches, a series called "Ben's walk." This was a beautiful summers day, and we started out along a countryside road. Feilds of corn on either side. We followed the app to the first cache, and all I could hear was a constant BZZZZZ, there where HUNDREDS of bees in the plants nearby. As we carried on, there were more insects. Dragonflies where everywhere, butterflies, flies, bees, wasps. Everything. I've never seen so many bugs. The further we went, the closer to the moorland we got, and then my other half noticed some snakes perched on a rock in the little lakes. Well if this wasn't my worst nightmare, I don't know what is. I took a deep breath and thought i'd be okay, and just to keep walking. I decided at the end of the walk, to get my photo taken beside this beautiful old tree, with some lakes in the background. Little did I know that that was a snakes nest, and my amazing Fiance didn't think to tell me until I came back from the photo. (Oh, I do love him!) As we went back, we tried to get the only geocache we had missed on this trail, my other half moved a rock (where we thought the geocache was) and out popped another snake. (I've had it with these mother**** snakes on this mother***** walk) On the rushed walk back to the car, we saw two falcons swooping into the grass, saving the day from the snakes, I can only hope. 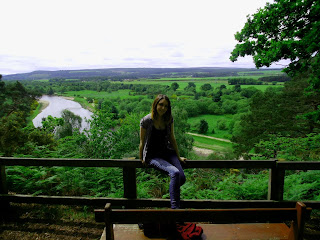 A short, but stunning walk. The Earth Pillars is a wonderful view of the Spey. It is a deposit of Glacial Till, from the last ice age. The view is amazing, and you can really get the sense of how powerful the Glacier was.
To get to this beautiful place, you need to go south of Fochabers just a couple miles. I don't remember this particular path being signposted, it was just a wee parking area just off the road. The walk can be particularly steep, but well worth it.

There have been a lot of others on my list of amazing of amazing places to see or do, and to narrow it down was hard, but as you can see these places all had history or wildlife, or me being clumsy/mindless - which is always a good story to tell, and now we begin the next chapter of our lives, 2017. I wonder what amazing things I'll stumble onto this year- hopefully not any more snake nests!